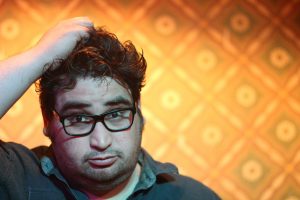 Hey guy! It´s me, Kinan. I´m doing a long set (45-60 minutes) in english with one support act that i will announce later.

I started doing comedy in june 2015 and since then stand up comedy have been my favourite drug and of the things I most care about (actually, years before I started it). My goal is to be a really good stand up comedian and performing at open mics helped a lot developing bits and I´m trying to get used to do long sets to improve my performance. I´ll give it my best to deliver a good show.

The show is donation based and i wanna keep these shows that way so i can do more of them and more people would come. However, there will be free shots before the show starts.

I´m happy to announce that the supporting act is Mr. Jonathan EnHan Su.
***ABOUT JONATHAN***
Jonathan is one of my favourite comedians and his act is one of the most interesting in the berlin scene. It´s like free jazz, good free jazz, very unpredictable and very funny. Here are what some of Berlin comedians say about him.
„When I first saw Jonathtan EnHan Su I thought he was retarded. Then I realized we were both retarded.“
„If you want to get close to God pray, If you want to get close to God’s penis go see Jonathtan EnHan Su.“
„Jonathan enhan us is the greatest comedian off all time, and the only reason I’m saying that is cause I want to fuck him.“